The 21st century has opened with a record-high human life expectancy and prosperous economic development. However, notwithstanding this overarching wholesome narrative, life-threatening issues persist on a global scale. Maternal mortality and morbidity, in particular, continue to plague mothers from both developed and developing countries, killing around 295,000 women in 2017 alone. According to the Centers for Disease Control and Prevention, maternal mortality is defined as the “death of a woman during pregnancy, at delivery, or soon after delivery.”

Most strikingly, these deaths are often preventable as the World Health Organization (WHO) reports that an average of about 810 women died from avoidable causes every day in 2017 alone. This dangerously prevalent crisis has led to countless tragedies, and we can’t help but wonder: What can be done to save those mothers?

To understand how we can help mothers around the world, we must first understand the root causes behind maternal deaths. The causes of maternal mortality and morbidity are complex and often interrelated, ranging from healthcare inadequacy to social inequity. Some direct causes are postpartum hemorrhage, infection, unsafe abortion, and other medical conditions during, or immediately following, childbirth. Hygiene is undoubtedly a critical prerequisite for safe childbirth. Behind these medical reasons, however, lies other socioeconomic factors that also play a role in maternal deaths. A study by Nawal Nour, an obstetrician, suggests that three main types of delay lead to the above conditions (and thus maternal mortality): delay in seeking care, delay in reaching care in time, and delay in receiving adequate treatment. These delays are further correlated with the unskilledness of mothers and midwives, poor access to transportation, and the inadequateness of healthcare facilities—all of which may be attributed to social and economic inequality in the region. 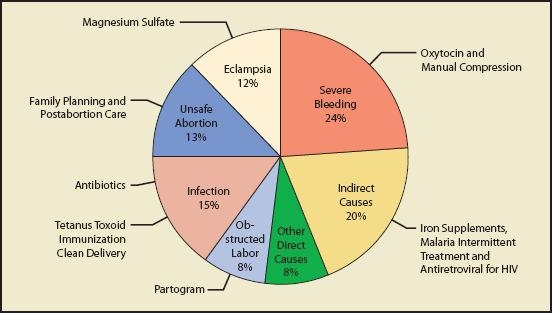 Statistics from WHO report that 94% of the total maternal mortality occur in low and lower-middle-income countries. For example, in sub-Saharan Africa, the maternal mortality rate is estimated to be as high as 415 maternal deaths per 100 000 live births. A girl living in that region would be 210% more likely to survive if she lived in Australia or New Zealand. Sub-Saharan Africa and South Asia account for more than 86% of maternal deaths in 2017, embodying the current vast inequality in the maternal health landscape. Moreover, maternal mortality more adversely affects minorities: In the US, for instance, Black women and Native American women face higher maternal mortality rates (40.8 and 29.7 per 100,000 births, respectively) than white women, whose maternal mortality rate is around 12.7 per 100,000 births. Women of color are almost always disproportionately impacted by this issue. This significant gap in pregnancy-related deaths across different demographics and economic backgrounds reflects the larger struggle of mothers who have little support, and it continues to demand international attention and collaboration.

In response to this global crisis, one of the UN Sustainable Development Goals is to “reduce the global maternal mortality ratio to less than 70 per 100,000 live births” by 2030. There are currently a variety of policies in place in an attempt to achieve this goal. On an individual level, mothers in relatively more privileged conditions should follow guidance from healthcare authorities, maintaining a balanced diet, exercising regularly, getting enough sleep, and refraining from alcohol and drugs. From an international lens, the situation is more challenging to resolve. In the report on “Strategies toward ending preventable maternal mortality (EPMM)” the WHO offers general guidelines such as empowering young women, prioritizing effective healthcare financing, and adopting human rights-based approach toward sexual and reproductive health. This rhetoric attempts to unite political entities and stakeholders to collaborate on the problem of maternal mortality and morbidity, and it has obtained laudable results: There has been a 38% decrease in the total number of maternal deaths from 2000 to 2017.

Despite these efforts, a low level of maternal health awareness remains a significant obstacle to overcome. Socially, the women most negatively impacted by this crisis usually belong to minority groups that are marginalized by society because of their income, race, gender, or a combination of these factors. Consequently, many mothers received little, if any, education or training that prepares them for labor. Raising awareness on maternal mortality is still an important yet often overlooked task that must go in conjunction with other resolutions.

On January 23, 2017, New Jersey celebrated its first Maternal Health Awareness Day. Soon after, many international initiatives like International Initiative on Maternal Mortality and Human Rights were founded to help support the cause. These organizations and initiatives are key to spreading knowledge about maternal health and improving the conditions of young women across the globe.